by Alexandra Llovet, 19C
Biology and Spanish and Portuguese 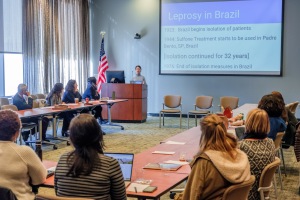 I spent just one week in Minas Gerais, Brazil. In that brief time window, I found new data, perspectives, and objectives for a project I had started the year before on the stigma of leprosy. I was headed to Sao Paulo to continue my project over the summer on a grant from the College of Arts and Sciences. The Fox Center for Humanistic Inquiry and the Halle Institute for Global Research funded an additional week of research in Minas working alongside Dr. Jessica Fairley, a physician and epidemiologist specialized in leprosy research.  I spent most of my time in Minas shadowing at a specialized infectology hospital where I came to understand how the Brazilian healthcare system treats leprosy patients today. I witnessed the severe consequences of untreated leprosy, a disease that is completely curable with antibiotics, and I heard patients tell tragic stories of discrimination because of the stigma of leprosy. Despite leprosy’s curability since the 1940s, patients still face rejection because of their disease.

Compulsory isolation of leprosy patients in Brazil began in 1923 and was not outlawed until 1976 (although some research suggest that isolation went on for longer). I was fortunate enough to be able to go to Santa Isabel, a leprosaria that still houses hundreds of patients. Each patient mentioned the exact date the police had brought them to the leprosaria. Their lives took a drastic turn on that date because of a diagnosis. Outcasted from society, the leprosy patients were excited to meet me, a curious college student simply trying to understand. For them, it was a rare occurrence, someone cared to listen to their stories. I gathered as many of the narratives as I could, and my project took on new meaning. Even if it was just within the small Emory community, I was helping them retell their traumas and spread awareness of the longstanding consequences of discriminatory healthcare policy.

My project was an interdisciplinary analysis of the sources of the stigma of leprosy. I wondered why the perception of leprosy as a contagious, disfiguring, and fatal disease had not changed despite advances in clinical care and breakthroughs for patients’ rights. I found that the longevity of the stigma is related to a combination of factors: religion, pop culture references, and patient isolation to name a few. To establish this analysis, I used a large variety of sources: patient narratives, medical records, short stories, poems, novels, and paintings. The Fox Center was an incredible asset in the writing process. The network of professors, graduate students, and peers helped me strengthen my argument when I dealt with disciplines I had never explored before like Art History and Religion Studies. Furthermore, discussions at the Fox Center helped me realize holes in my writing that needed clarification. The environment challenged me to be a better researcher and writer, and the experiences I had both at the hospital and the leprosaria with their funding changed the way I see healthcare and my future role as a physician.

Alexandra Llovet is a senior on the Pre-Medicine track, double majoring in Biology and Spanish and Portuguese. Her research focuses on the stereotyping of Hansen’s disease (in derogatory terms, leprosy) patients in Brazil. Alexandra began her research on this topic during the summer of 2017 and continued the project the following summer. She visited two patient isolation colonies, shadowed doctors in a reference center hospital and gathered literary pieces to see the different faces of Hansen’s. Her thesis has an interdisciplinary approach that incorporates first-hand accounts of patients and artistic sources as representations of the disease in twentieth and twenty-first century Brazil.