My experience at the Fox Center is a final culmination of long-time passion of mine. When I was in high school, I became briefly obsessed with Russia’s then ongoing invasion of Crimea and the Donbas. The fact that a nation could absorb another sovereign nation’s territory in a cynical and completely unethical land grab struck me as something out of some 1930s dictator’s infernal world domination plot. What arose out of the invasion was a grisly bloodbath that eventually culminated in deaths of over 13,000 people and displacement of 5.4 million Donbasians. Although the conflict held significant implications for both America’s relationship with Russia and Eastern Europe’s future, the war quickly fell out of the media cycle. I thought that would be the last of my endeavors in Eastern European affairs, as my attention drifted towards other issues. Thankfully, I was mistaken. During my first semester at Emory, I took a class with Matthew Payne, a historian of Russia and the Soviet Union, that focused on the USSR’s involvement in World War II. Professor Payne’s ability to communicate the sheer immensity and importance of Eastern European history, combined with his seemingly limitless knowledge of world affairs and enormous generosity, rekindled my interest in the region that I had become so obsessed with in high school.

Desiring to expand my scant knowledge of this fascinating region, I quickly threw myself into studying as much as I could about Eastern European history. After concluding my first year at Emory, I enrolled in a Russian-language immersion program at Middlebury College in order to build a strong linguistic foundation. The tutelage I received under Professor Payne, both my mentor in school and in life, compelled me to dive deep into my studying of the scantily research Donbas War. After taking both a Directed Reading course on the historiography of Ukraine and a Research Tutorial in translating Russian-language historical documents, I committed myself to writing a thesis on early separatist movements in late Soviet and post-Soviet Eastern Ukraine, a topic that has been left mostly untouched by academics and political analysts in the West.

As I read and reread volumes upon volumes of Ukrainian history, I was driven to pinpoint how and why the separatist movement first came about in the Donbas. In my readings about the post-Soviet era, I found that most Donbasians supported Ukraine’s independence from the Soviet Union, which went in complete contradiction to the narrative established by both pro-Russian and pro-Ukrainian talking heads. Moreover, during the Donbas’ coal strikes of 1989, Ukrainian nationalists were more than willing to work with predominately Russian-speaking coal miners in creating a “Ukraine united by brotherhood and mission-oriented nationalism.” However, Donbasians’ support for the Ukrainian nation-building project waned significantly during the early post-Soviet period, as Ukraine fell further and further into economic recession and hyperinflation. Political elites in the Donbas were quick to criticize Kyiv for Ukraine’s privations, blaming their steadfast dedication to “flighty concepts of national identity and language” for Ukraine’s privations. In the wake of Ukraine’s disastrous hyperinflation of 1993, prominent political and social figures in the Donbas started adopting pro-separatist talking points, insisting that the region would be far better “alone than with Kyiv.” Not wanting to jump to conclusions, I wanted to see if the social reality of post-Soviet Ukraine squared with these politicans’ inflammatory rhetoric. Moreover, I wanted to analyze the discourse of these separatist organizations in order to understand both the methods they used to draw Donbasians into their ranks and the mediums they exploited in order to construct their ideology.

At first, my research focused on self-described “intellectual” separatist organizations, which played a critical role in developing Donbasian separatist movement’s ideological foundation. The two most prominent groups that I studied were the International Movement of the Donbas (IMD), established by the staunchly Russophilic journalist Dmitrii Kornilov, and the Citizens’ Congress (CC), a Pan-Slavic political organization that demanded greater economic cooperation and cultural solidarity between the Republic of Ukraine and the Russian Federation. Although both of these movements existed on the fringes of Ukrainian politics, their rhetoric, which insisted that the Donbas was an “ancestral part of the Great Russian Nation,” provided the groundwork for the Donbasian separatist organizations that arose from Russia’s invasion of the Donbas in 2014. Despite the small size of these groups, the IMD and CC were able to attain a disproportionate level of media attention, garnering far more space and airtime on the Donbas’ airwaves and newspaper pages than any other early post-Soviet political group in Eastern Ukraine.

Although the IMD and CC played a vital role in creating an intellectual framework for their cause, it was the Donbas’ pro-separatist oligarchy that made the Donbasian separatist movement a material reality. After the collapse of the USSR, Ukrainian officials, wanting to expand their homeland’s nascent free-market economy, sold former state-owned enterprises at a premium to already-wealthy individuals, many of whom were members of the Soviet Union’s elite managerial class. These “capitalist elites” would eventually turn on the Ukrainian government, using populist and pro-separatist rhetoric to justify both the Donbas’ need to gain autonomy within Ukraine and their potential fit as key political power players in the impoverished region. Many of these oligarchs preached a “prosperity gospel” of the sorts, insisting that their immense wealth would eventually “trickle down” into the pockets of poor Donbasians. However, instead of improving Donbasians’ economic situation, the new capitalist elite used their newfound wealth to create cartels that protected their personal assets from the “meddling” of pro-democratic activists and politicians. They were intent on robbing as much as possible from Ukraine’s decaying industrial and coal-mining assets as possible, all whilst terrorizing any individuals or groups who decried their undemocratic and totalitarian policies. Thus, these “industrial separatists” contributed far more to the Donbas’ economic despair than any of the politicians in Kyiv or Lviv.

The Fox Center’s generous grant has afforded me both the privilege of working in a tightly-knit epistemic community and the ability to conduct further research into my topic. The lump sum that I received as a part of my fellowship helped fund my interview-collecting over the Winter Break in Kyiv. Hearing the lived experiences of the Donbas’ denizens contributed a great deal to this project. I spoke with refugees and former separatist affiliates who dealt first-hand with the destructive repercussions of Donbasian separatism. Their accounts and lives illustrated that identity is more of a practice in subjectivity than it is an objective truth. Although my interviewees admitted that the separatist cause was rooted in a real problem (the callousness many politicians, both in Eastern and Western Ukraine, had towards the poor), they also admit that the separatists’ cause did little to ameliorate the Donbas’ desperate situation. Instead, it amplified it, displacing millions upon millions of Donbasians from their homeland. Without their insight, this thesis would have been at best a clueless meditation on a “forgotten” conflict. Moving forward, I hope to expand upon my research in graduate school, if I indeed commit to that decision.

Daniel Thomas is a senior on a pre-law track, double majoring in History and International Studies.  He is currently writing an honors thesis on the history of Russian separatism in the Donbas, a region in Eastern Ukraine. Daniel conducted his research in Kyiv, Ukraine during the summer and winter of 2019, using archival documents, periodicals, and oral history techniques in order to elucidate the various social problems and economic privations that contributed to the early Donbasian separatist movement. Through the usage of previously unused archival documents and first-hand accounts of daily life in Eastern Ukraine, Daniel hopes to both contribute to the limited historiography on post-Soviet conflict zones and shed light on the tumultuous history of one of the world’s least-discussed conflicts. 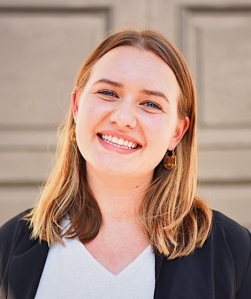 Being a Fox Center Undergraduate Fellow has been an immense honor, and has provided me with vital support for my thesis and placed me in a community of inspiring students working towards the same goal. It has given me the physical space to work on my project and the environment necessary to think through difficult issues surrounding my thesis. In many ways, this fellowship has provided me with crucial support, both academically and personally, to produce a thesis of which I am proud.

My thesis examines democratization efforts by the United States in Jordan, critically comparing these efforts to those of Jordanian civil society organizations, grassroots movements, and governmental bodies. Jordan receives the fourth highest amount of monetary aid from the United States of any country, much of which is dedicated to democratization efforts. This is part of a larger theme of U.S. initiatives in the Middle East that stem from the Cold War era, which viewed the spread of democracy throughout critical areas such as the Middle East to be vital to U.S. interests and regional stability. This support for democracy has continued to be a central aspect of the United States’ foreign policy to the Middle East following the September 11, 2001 attacks. My project focuses on these democratization efforts, as they use large sums of taxpayer dollars to support a change in the governmental system of Jordan, when in fact the country’s monarchy and general stability work within U.S. interests in the region. This project asks the questions of how the United States government and U.S.-based organizations are working to build democracy in Jordan, how the Jordanian government and monarchy acts in relation to these efforts, and what Jordanian civil society organizations and activists are doing to promote democracy themselves. Ultimately, it argues that an emphasis on civil society and grassroots movements is critical to understanding foreign policy, and that this kind of analysis in the case of democratization in Jordan reveals a counter-intuitive and grim reality about U.S. foreign policy.

As a Fox Center Fellow, I have been given the kinds of support necessary to do this project justice. As a non-Jordanian researcher, I knew that I needed to approach this project with care and with an intense analysis of history, theory, and international politics. For the whole first semester of this year, this was a daunting task. I was lost in the many layers of research and analysis that this project required and constantly felt as though I could not find the mental space to grapple with these layers of scholarship. The Fox Center’s support for me and my project gave me valuable confidence in my thesis and its value in both the field of humanities and international politics. The Center gave me the monetary support and the physical space that allowed me to focus on my thesis and give it the time and mental focus that it deserved. It put me in a small community of other researchers who have the same dedication to Humanities research whose passion for their projects gave me some much needed inspiration at a time in the semester when it seemed as though the project would never be complete. I am immensely grateful for the Fox Center and this fellowship.

MK Healy is a senior double majoring in Arabic and International Studies with concentrations in the Middle East and State and Society. Her research focuses on the responses of civil society actors in Jordan to U.S.-democracy promotion efforts during the reign of King Abdullah II. She is studying this topic by examining the different levels of U.S. democracy promotion in the region, the motivations behind them, and how they compare to the democracy work being done by Jordanian civil society actors and grassroots organizers. The goal of her research is to add a grassroots emphasis to the current paradigms in International Political Theory.