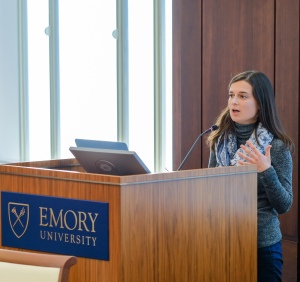 This August, I traversed the Atlantic and landed in France. Paris, the so-called ‘city of light,’ proved to be quite illuminating for my honors thesis research! I chose to travel to Paris because I had conducted research with a professor from University of Paris—Sorbonne Nouvelle’s Language Pedagogy Department while studying abroad in Paris in the fall of 2018. This professor, Dr. Pascale Trévisiol, showed me the rich history of second language pedagogy research that scholars have conducted and documented in France. Thus, I set off in August to learn more from this wealth of resources and to contribute to the field by collecting data of my own.

When I arrived in Paris, I realized to my dismay that many French libraries and universities are closed for most, if not all, of August. Fortunately, many of the resource centers that I wanted to visit were open at staggered times within the month. I spent the beginning of August studying collections of French as a second language textbooks, which I found at libraries, bookstores, and textbook publishing houses, to investigate their integration of educational technology into proposed curricula. I passed the final portion of my stay at the French Ministry of Education’s educational research headquarters in Sèvres, France. In the organization’s Document and Resource Center, I met with experts on language pedagogy who directed me to their large collection of texts on computer-assisted language learning, also known as technologies de l’information et de la communication (TIC) in French.  These texts have proved to be invaluable for my thesis in that they have allowed me to answer my research questions in a manner that expands beyond a myopic, America-centric perspective which I likely would have adopted otherwise.

I am exceptionally grateful to the Halle Institute and the Fox Center for providing me with this formative opportunity, as I believe that this fellowship will be the début of a life-long engagement in global research.

Sophia Minnelli is a senior double majoring in Linguistics and French Studies. Her honors thesis examines the process and outcomes of learning French as a foreign language, with a focus on the presence of technology in learning and assessment. Sophia traveled to Paris in the summer of 2019 to analyze specialized collections of French as a foreign language instructional materials. She also collected evaluations of learner speech to gauge differences in the proficiency assessment of human raters as compared to automatic, technology-mediated methods. Through her thesis, Sophia hopes to answer questions related to bias in proficiency evaluation and to the role of technology in the language classroom.